Secret Codes and Empty Graves: The Legacy of the Knights of the Buried Chambers 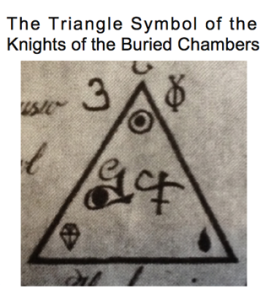 For over a hundred years they conducted their affairs and spread their numbers throughout Europe and Colonial America. Yet they never captured the public’s attention as did the Freemasons or Illuminati. At first glance they have much in common with these and other secret societies of the time: Esoteric doctrine, clandestine initiation rituals, the usual hierarchical power structure. They even overlap in membership! The numerous similarities have caused some confusion for those seeking answers. But when we take a closer look at the Knights of the Buried Chambers, many unique and tantalizing mysteries emerge.
For starters, there were rumors that the Knights of the Buried Chambers were immune to death itself. On several occasions when their graves were exhumed, the coffins were discovered to be empty. Why did these mock burials happen, and to where did the supposedly deceased Knights actually disappear? It boils down to two theories. 1. Some believe they had succeeded in creating a recipe for eternal life, or for extending a lifespan well past the centenarian mark. The quest for an exceptionally long life appears to be one of their primary goals. 2. Others claim they removed the bodies in order to hide evidence of toxic exposure to cadmium, mercury, and other heavy metals. Indeed the Knights of the Buried Chambers were said to have white hair, and medical experts tell us that cadmium and other heavy metals can permanently alter pigmentation. And we know they had at least one ritual that involved these toxins.

Perhaps more than any of their peers, the Knights of the Buried Chambers truly aspired to be covert. Every initiate was made to swear an oath to “Humility, Reverence, and above all Secrecy.” Of course their primary intention was to obscure themselves from the public in general, but surreptitiousness was also the objective within the organization. The identities of the highest ranking members were kept concealed even from each other. Those in higher ranks routinely spied on newer initiates to assess their worthiness and dedication to the principles of the Order. Perhaps this is why they were known to have built so many hidden doors, rooms, and tunnels into their meeting halls, which they referred to as “Temples”. Some of these were quite elaborate, and would have also served perhaps to hide their enormous wealth, the “diamonds and gold” they were said to have hoarded.

Absolute secrecy was essential. In the pursuit of this they practiced a type of coded writing of their own invention. It is now known that these codes employed the symbolic power of the triangle and the number three, which was deeply sacred to the Order. Some specific examples include: 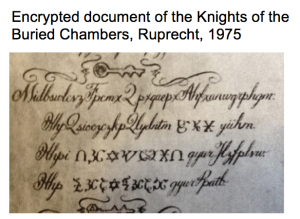 To further protect their writings, they switched between these codes of three, randomly and often - sometimes even mid-sentence. In Ruprecht's book, published by Halcyon in 1975, a small passage is partially deciphered, an excerpt from a larger manuscript to which he was fortunate to be provided access and shared for our benefit in his book. Ruprecht’s belief was that the passage was referring to the identity of the last Auric Knight, that is, the individual who held (or holds) the ultimate position within the Knights of the Buried Chambers, with access to all the teachings, mysteries, and secrets that the Order possessed.

Even the triangle symbol is itself is a coded reference to their “Three-Fold Purpose” to which every member was devoted. However not every member was permitted to wear the triangle. This was reserved for the higher in rank, those who had proven, sometimes over many years, that they were worthy of their title. New initiates and lower tiered members often spent their entire lives at the entry levels. These members followed the lesser “Four-fold Purpose”, and were made to wear the shape of a square. The square symbol also lacked the water droplet and other symbols included in the Knights of the Buried Chamber’s triangle motif. 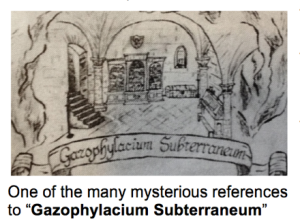 Their dedication to secrecy is now a burden to us. The lack of dependable and varied sources is maddening. Although they are known to us as the Knights of the Buried Chambers, they often referred to themselves as The Order of The Knights and Scholars of the Buried Chambers of the Ancient Orient. This is surely their full official name, but what about the ancient orient was so important to them? Was that where the “Great Discovery” took place, an event shrouded in the darkest mystery that some claim was their sole raison d’etre? Or perhaps it has something to do with to the mysterious term Gazophylacium Subterraneum to which their writings refer quite extensively, though without explanation.

The Knights of the Buried Chambers had many secrets. But perhaps the greatest mystery of all was their sudden disappearance in the first decades of the 19th century, when their members vanished and their Temples were left empty and abandoned.
Subscribe
Comments for this post were disabled by the author